What I’ve always loved about sports is the complication of the human element. I love sitting at the 400 or 500 level of a baseball stadium and hearing fans complain about umpires missing balls and strikes from literally hundreds of feet away. It’s the fact that a football referee positions a football team where he has eyeballed the ball to be downed and then proceeds to measure it (or as we learned yesterday night, how two different refs can make two totally different calls while inches away from watching a play happen).

The human element can also be the elephant in the room. With the billions of dollars that professional sports leagues, franchises, athletes, and administrators make each year, they have relatively small voices. That is, we see more than we hear. In fact, the often watered-down, made for all time zones language of sports telecasts have made Internet bloggers and tweeters mini-celebrities among sports fans. 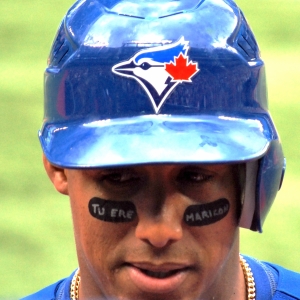 I make this point because an athlete used his voice last week – Yunel Escobar wrote a slur on his eye-black. He was suspended for three games by the Blue Jays, and his salary for those three games will go to non-profit civil rights organizations. This is all well and good. Sports journalists are highlighting the rampant homophobia that exists in professional sports locker rooms across the world. I fear, however, that we are missing the point.

“Maricon” means fagot in Spanish. It’s used in the same context as using the word fagot, the n-word, gook, chink, pussy, or douchebag. These words aren’t in and of themselves powerful. Their definitions aren’t powerful. What is powerful about these words are their etymologies. What I mean to say here is that if someone calls me a gook, it’s not the word that will offend me. Rather, it’s the history that the word carries. The term, as told to me by my dad, comes from Americans’ misinterpretations of the Korean gook. (Hangook means Korea. Migook means America.) Its use is meant to be derogatory. It carries the weight of a venomous past.

I mean to say that the conversation about these words should not simply be about whether or not someone “knew what they were saying.” It should be that we, as human beings, should start remembering the human element is about how we interact with each other. Words are tools, and words carry with them the weight of their use throughout history. When we use them, we should be more aware how powerful they can be. Escobar’s intent when he wrote “maricon” on his eye-black makes a difference. He put a word on his body that questions the masculinity of the Spanish-speaking gay community.

That is, the context within which these words are used and, especially, the interpretation of those who see and hear these words matters. I don’t mean to argue that these words should be hidden or censored. On the contrary, most of the writers I love are unafraid to make use of these words. They embrace giving these words context; they build and disseminate how words do, in fact, have great power.